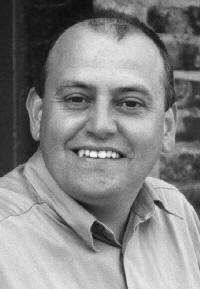 Born and Bred in South Shields, where he stills lives with Trish their four kids and Max the Dog. He has only ever lived out of the town for 15 years and never anticipates repeating the mistake..
A circuitous route led to him going from accountancy to degree to sales to lecturing to eventually taking up his current role as Executive Director of The Customs House Trust which he has held since January 2000.
During his tenure The Customs House , once described as having neither national or regional significance has established itself as part Arts Council England’s National Portfolio of arts Organisations.(NPO) Successfully delivering national programmes Creative Partnerships, Find Your Talent and Night Less Ordinary. The Customs House is Particularly proud of its work with Children & Young People and was created a centre of Best Practice by Trinity College London for its deliver of Arts Award training, it continues to be the regional lead on Arts Award training teachers and staff of cultural organisations. The Customs House is particularly proud of its work with Looked After Children for which it received a national award.

CHECK OUT THE PHOTO ALBUM ON THE FACEBOOK PAGE